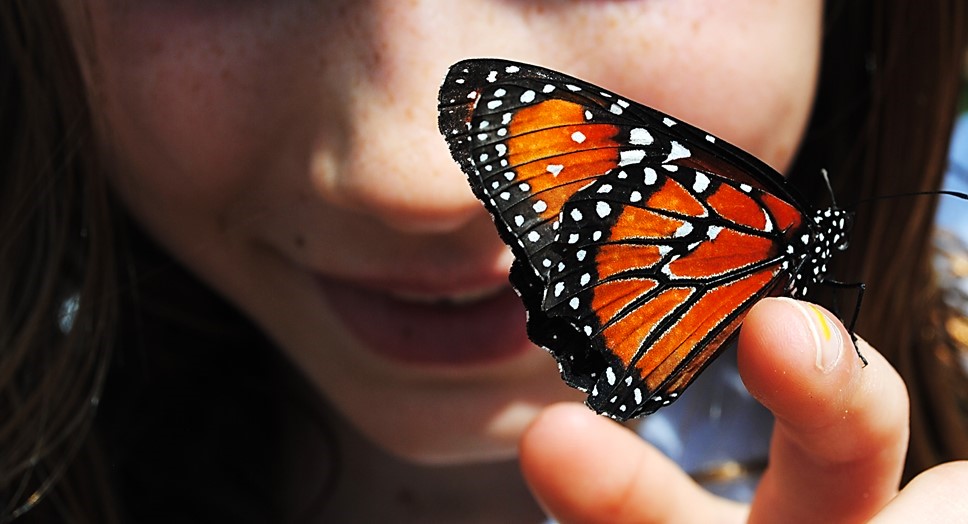 On Color Temperature and the Mating Habits of Butterflies

Lucrative returns on investment from light-emitting diode (LED) lighting have spurred rampant replacement of traditional light sources, with some of the fastest growth occurring in outdoor roadway lighting.  The raw efficacy of LEDs, coupled with tight beam control, offers a substantial reduction in energy consumption “per pole” and a fast payback period.  The alluring opportunity encourages the use of the cheapest and most efficient white LEDs, i.e., those using minimal amounts of phosphor (which is used to convert the primary blue/violet LED-chip light to white) and which thus exhibit high color temperature.

What is color temperature?  The somewhat (unnecessarily) maligned term is just a measure of the chromaticity, or color, of the radiation from objects raised to very high temperatures.  Like for flame, the hotter they are, the bluer they become.  Candlelight has a color temperature of about 1800 degrees Kelvin (K), a typical incandescent lamp about 2700K, while noon-day sun is considered to average 5500K[i].

The LEDs described above for roadway lighting leak a significant portion of their primary (blue) emission through the thin phosphor layer, resulting color temperatures of 4000K or more, much higher than that of common incandescent lamps, or traditional roadway lights, i.e., golden-hued high-pressure sodium (HPS) lamps.

In response to ecological and human-health concerns about the rapid adoption of high color temperature light sources in the outdoors, and amidst silence in the general lighting community on the subject, the American Medical Association (AMA) in 2016 issued guidelines recommending the use of lower color temperatures (3000K or less) for outdoor lighting[ii].  That is, it suggested reducing the amount of short-wavelength (i.e., blue/violet) emission from LEDs used in these applications.

Why the concern over short wavelength light at night?  There are quite a few, in fact.  Blue light at night is well-known to disrupt circadian rhythms and has been linked to a wide range of health issues including cancer, diabetes, heart disease, and obesity[iii].  While some argue that the intensity and duration of exposure of drivers to road lighting is unlikely to cause as much disruption as in, for example, night-shift workers, the ecological situation is a different story.  Animals (bird, bats, insects) are far more likely to endure exponentially higher doses of night-time outdoor lighting, especially since many are attracted to it.  Moreover, such lighting can disrupt the feeding cycles of such animals and upset the natural balance of predator-prey populations[iv],[v].

Short wavelength light at night might even disrupt the mating habits of butterflies, which use such light to assess the wing patterns of potential partners[vi], an activity nature designed to occur during the day (the only time short-wavelength light is available naturally).  The long-lasting ecological impacts of artificial light at night are uncertain, but the recently documented rapid population decline of certain insects[vii] is more than enough of a reason for us to strive for a stance of “do no harm”—to quote my friend, lighting designer Jim Benya—when it comes to artificial light at night.

To see how not to do it, refer to the recent photographs below from Mountain View, CA (hometown of Google Inc.), a community one would like to think would be on top of the best possible solutions for its infrastructure.  Clearly, something is wrong here.  (Policy for outdoor lighting, anyone…?)

The lighting community’s responses to the AMA statement, while respectful on the surface, seemed to mask some resentment.  Indeed, shortly after the announcement, a slew of reports emerged claiming LEDs are “no worse” than traditional light sources when it comes to light pollution and that LEDs should be adopted on their original merit (energy savings).

One study[viii], sponsored by the U.S. Department of Energy (DOE), was a comparative simulation of sky-glow (brightness of the night sky resulting from light pollution).  The study concluded that LEDs with up to 4000K are “no worse” than HPS lamps.  However, a more careful review of the data shows that 4000K spectra in fact are worse under cloudy conditions, even with the assumption LEDs produce no up-light and require only half the light output of HPS.  Moreover, the range of atmospheric conditions considered in the study does not include very humid conditions that can exist, for example, near the North Sea.

I recently experienced this phenomenon first-hand during a nighttime road-trip to Amsterdam. A colleague and I came upon a stretch of highway where the street lights switched from HPS to high color temperature LEDs. The effect was dramatic, and negative.  A cascade of bright balls of bluish light began to hurl over us.  This unambiguous increase in glare, which no doubt contributes to increased sky-glow, suggests to me that a wider range of atmospheric conditions[ix] should be included in the DOE’s simulations. It further raises the likelihood that the AMA’s guideline regarding color temperature limits may in fact not be aggressive enough.

All this suggests more work is necessary to achieve “do no harm” when it comes to selecting LEDs for outdoor lighting applications.  The exciting part is that very interesting options exist.  Amber emitting phosphor-based LEDs, demonstrated almost a decade ago[x], are now commercially available and emit almost no short wavelength emission.  Luckily, the DOE study included this spectrum and the results suggest that, under the same condition mentioned above, amber LEDs produced less than half the sky-glow of HPS lamps. To me, here is the real opportunity, to not only achieve reduced energy consumption, which is critical to our earth’s climate, but to simultaneously and substantially reduce the negative impacts of artificial lighting on our planet’s ecosystem.

Amber LED based outdoor light fixtures are already on the market[xi], and safety concerns regarding such single-color street lighting are potentially overexaggerated[xii].  Currently, amber LED efficacy is not as high as that of white LEDs, and the costs are higher, but with increased deployment and the integration of controls, this approach will provide substantial cost-of-ownership savings over HPS.  Furthermore, the lower efficacy presents an opportunity for LED technologists to invent even better solutions, whether based on new phosphors or on direct, primary-amber LEDs from breakthroughs in materials science.  Finally, completely new spectral engineering, enabled by emerging single-color emitters such as quantum dots[xiii] and line-emitting phosphors[xiv], will bring even more opportunities to engineer LEDs in a holistic fashion that addresses energy savings, ecological concerns, and safety/security simultaneously, resulting in dramatically better products in our future for necessary outdoor lighting.

[vii] Macgregor CJ et al., “The dark side of street lighting: impacts on moths and evidence for the disruption of nocturnal pollen transport,” Glob Change Biol, 23: 697–707 (2017).